Dickinson junior Judy Rogers, after spending the summer in Sierra Leone as part of the Operation Crossroads Africa (OCA) program, shared her experiences with her classmates and local communities. Rogers remarked on the similarities between African cities and American cities, and her own intimate participation in Sierra Leonean culture: students were expected to live as the local people did, eating their food and donning traditional dress when appropriate.

At the close of her sophomore year, Judith Rogers, one of the first African Americans to receive campus housing at Dickinson, had received two distinctions.

The Dickinson College Chaplain Paul Kaylor wrote a letter in October of 1969 to offer the presentational services of the most-recently returned Project Africa participants.Â  Dorothy "Dottie" Cole worked with twenty other students in Sierra Leone "building a hospital in the village of Mabai which will, when completed, serve persons from a 50 mile area in that country."Â 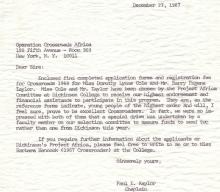 Paul E. Kaylor, Dickinson College's Chaplain at the time, wrote this letter to the Operation Crossroads Africa headquarters in New York City in December of 1967 to endorse Dickinson's two applicants for the year, Dorothy Lynne Cole and Barry Eugene Taylor. Kaylor recommends both students enthusiastically, writing "they are, as the reference forms indicate, young people of the highest order and will [...] prove to be excellent Crossroaders."

Barbara E. Hancock spent about six weeks during the summer of 1967 in Upper Volta, West Africa (present day Burkina Faso) where she lived with African students and helped to build a school. Upon her return to Carlisle, Hancock became Co-Chairman of Project Africa and wrote a letter to the "clergymen of Carlisle Area Churches" in an effort to "refresh [their] memories about Project Africa" and to offer them a presentation where she would show her slides and give a brief talk about her experiences.

OCA (Operation Crossroads Africa) was founded at Dickinson by Judy Rogers, '65. Rogers was the College's first representative in Africa in the summer of 1963. The following summer ('64) three other Dickinson students followed her lead.

Su Kenderdine, a Dickinson senior, spent 11 weeks in Barbour County, Alabama volunteering with SCOPE (Summer Community Organization for Political Education). Kenderdine joined other Northern college students in the South with the goal of helping "Negroes better their lives by arousing an interest in education and government." As part of their work, Kenderdine and other SCOPE volunteers set up schools in counties across the South and tried to "better job opportunities for Southern Negroes." 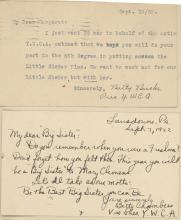 In two notes written to Miss Margaret Eslinger from the President and Vice President of the Young Womens' Christian Association, Betty (Elizabeth) Bucke '23 and Betty (Mary Elizabeth) Chambers '24, they request Eslinger's help by being a "big sister" to a freshman named Mary Clemens and to "Be the Best Big Sister you Can Be." Miss Bucke states that "We want to work not for our Little Sister, but with her." 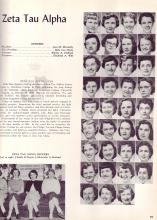 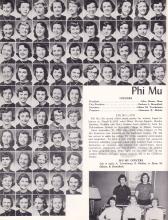