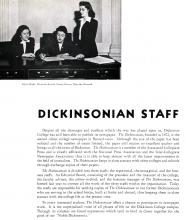 The 1945 Microcosm lists the editor-in-chief of the Dickinsonian as Nancy Person. Similar to 1944, the staff was dominated by female students in 1945 as the World War II continued to place strains on human resources at the college. Marjorie M. Arnold was the Business Manager for 1945. 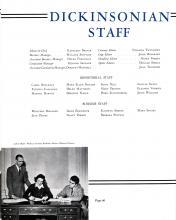