Professor Russell I. Thompson strongly urges Board of Trustees President Boyd Lee Spahr to lobby aggressively for the construction of a new women's dormitory, arguing that "Metzger Hall has long since served its purpose." He suggests the building should be sufficient to house 125 to 150 students. 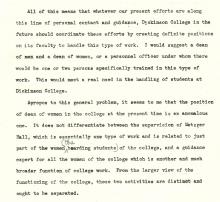 Professor Russell I. Thompson writes in a letter to President Boyd Lee Spahr about his ideas for the future of the college. He suggests the creation of a more specific position for the dean of women, calling the position as it stood then an "anamolous" one. He believes that the dean of women should be more than just a house mother or supervisor of Metzger Hall: instead, the dean should guide all the women of the college. 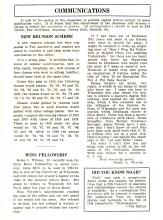 Helen L. Witmer graduated in the year 1919; and set off to the University of Wisconsin, where she obtained her master's degree. There she applied and was awarded the Bryn Mawr Fellowship in social economy, valued at $810 at the time it was bestowed. It was to be used between 1923-1924, after wich she would return to Winsconsin to get her Ph. D.

In a letter to Coach Harbold, Cyndi Lyn Olcott explains that she cannot attend the scheduled meeting and that she is prohibited from participating in Women's Track and Field until the second week of January. "If my injuries don't prevail," she writes, "I'll be out on the track more psyched than ever." 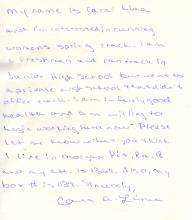 Cara Lima wrote to Coach Jere Harbold expressing interest in Women's Track and Field. She ran track during junior high school but was unable to participate during high school due to the lack of a team. She writes that she is "willing to begin working hard now."