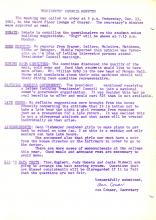 During the Presidents' Council (Women's Interdormitory Council) meeting of December 13, 1961, it was mentioned that the Council had been offered and declined membership to an un-named national women's organization:

During the Presidents' Council (Women's Interdormitory Council) meeting of October 18, 1961, issues related to the (upcoming) all-campus dance were discussed, including dorm closing procedures and the saftey of women walking home from the dance:
"Other Discussions: Suzy Cooper explained the dorm closing proceedure [sic] on the night of an all-college dance. The Council was asked to think about the problem of girls walking home alone to dorms on the outskirts of campus."

During the Presidents' Council (Women's Interdormitory Council) meeting of October 11, 1961 specifics of womenâ€™s curfews and the possibilities of taking â€œlateâ€ hours was discussed and debated. Drayer and Biddle Halls put forth dorm specific suggestions:
"Correction to October 4 minutes: When a girl has signed up for two late hours and arrives back at the dorm 19 minutes or less after the first late hour is up, she may take the extra minutes as late minutes rather than take the second late hour.

During the Presidents' Council (Women's Interdormitory Council) meeting of October 4, 1961 a variety of suggestions were put forth in regards to curfew and rules, particularly those within the rule book/advice guide given to women students-Dis 'N Data: 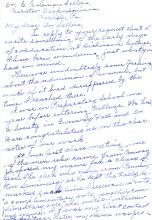 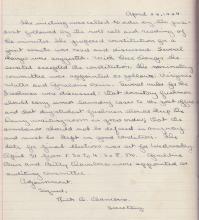 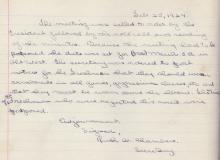 The Women's Senate minutes from February 25, 1924 discussed once again, the disciplinary action that must be taken for the freshman rule for the arm bands. It was ordered by the secretary to post notices for the freshmen that they "should wear armbands in all games, gymnasium classes, etc and that they must be worn above the elbow." 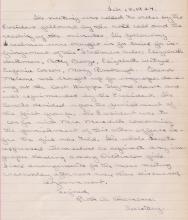 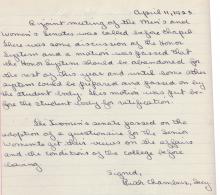 On April 11, 1923, the minutes from the Women's Student Senate documented that a joint meeting of both the Men's and Women's Senates was held at the chapel. A discussion of the Honor System occurred at the meeting. The Women's Senate passed a motion for the creation of a questionnaire for the senior women to remark on their views of the college's condition. 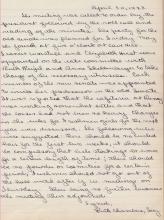