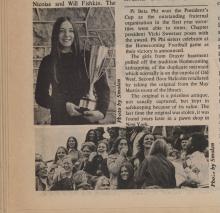 Pi Beta Phi won the President's Cup as the outstanding fraternal organization in the first year sororities were able to enter. Their victory was announced during the Homecoming Football Game in October of 1972. At the same time, the women from Drayer basement pulled off the traditional Homecoming prank and kidnapping of the duplicate mermaid which was located on the cupola of Old West. Second floor of Malcolm Hall retaliated by taking the original from the May Morris room of the library.