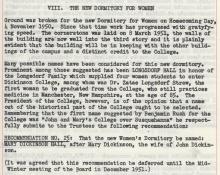 President William W. Edel suggested possible names for the new Women's Dormitory to the Board of Trustees. He presented one of the suggestions that the buildng be named Longsdorff Hall "in honor of the Longsdorf Family [sic] which suppied four women students to enter Dickinson College, among whom was Dr. Zatae Longsdorf Straw [sic]." He recommended, however, that the board select a name out of the college's historical past and that the hall be named Mary Dickinson Hall for the wife of John Dickinson.