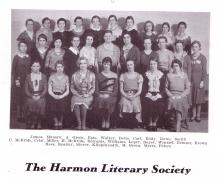 Dickinson's all female Harman Literary Society actively studied prominent figures in the literary world during the 1933 academic year.Â  A great deal of their focus during the second semester was "devoted to famous women who had won world-wide recognition in literary and other fields."Â  The large number of female members in the group is significant in and of itself and mirrors the significance of their focus on and appreciation for the female presence in literature.