In the minutes recording for the first meeting of the Congress of African Students of Dickinson, an account of issues addressed during the meeting and introduction for new members is given.Â  During this meeting , which was the groupâ€™s first of the fall semester, each of the ministers on the board of the congress introduced themselves to new members and gave brief descriptions of their given ministries.Â  Of the seven ministers, five were black, female women.Â  Robin Wilson served as Prime Minister, Brenda Gordy as Minister of Culture and Education, Michelle Arter as Minister of Action, Patien 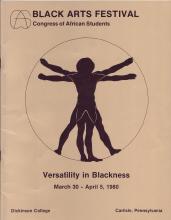