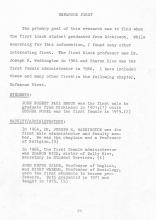 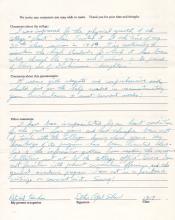 In 1955, Ester Popel Shaw (class of 1919) responded to President Edel's Alumni Questionnaire. Popel Shaw, the first known African American female graduate from Dickinson College, fondly remembered her days at Dickinson. When asked what were the "greatest shortcoming of Dickinson College," Popel Shaw responded that "there were no shortcoming when I was a student. The school seemed to meet all my needs." Moreover, she explained that she was "proud of being one of Dickinson's daughters.'" 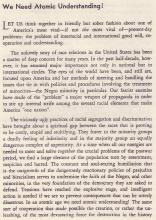 "Personal Adventures in Race Relations" by Esther Popel Shaw (class of1919), Dickinson's first African American female graduate, was published in 1946. It addresses the sources of prejudice and racism, and she urges in her introduction that cooperation is necessary to overcome these detrimental assumptions regarding African Americans. "At a time when all our energies are needed to meet and solve together the crucial problems of the postwar period, we find a large element of the population torn by resentment, suspicion and hatred.

Esther Popel, the first known African American woman to graduate from Dickinson College, was listed in the 1919-1920 yearbook. Described as quiet and "a true scholar," Popel commuted from Harrisburg to Dickinson every day. The Microcosm wrote, "We see her but we seldom hear her." Popel went on to become a poet of the Harlem Renaissance movement.