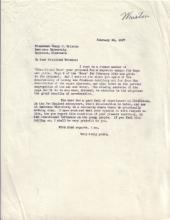 In a letter dated February 28, 1927, President Morgan wrote to the President Henry M. Wriston of Lawrence University in regard to a recent article Wriston published in the Educational News. In his article, Wriston advocated having separate campuses for men and women at coeducational institutions. Morgan explained that he was interested in this idea and wanted further information.