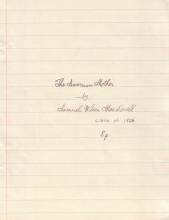 In his essay "American Motherhood," Samuel W. MacDowell argued that motherhood is one of the most important position a woman can hold. He contended that it was through motherhood, not the vote, that women were able to assert their influence within American society. He referenced Washington's, Adams', Lincoln's and McKinley's mothers to illustrate his point.