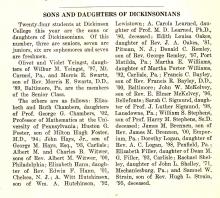 A total of 24 students at Dickinson this particular year were either sons or daughters of Dickinsonians.
The break down of sons and daughters was equal.
There were a total of 12 women enrolled whose father (and in the case of Martha Williams - her mother) had been a Dickinsonian.
Olivette Yeingst and Violette Yeingst (daughters of Wilbur M. Yeingst '97) were members of the Senior class. The remaining ten daughters were as follows: