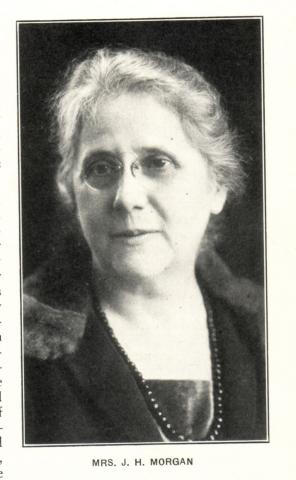 Mary R. Curran (Mrs. J. H. Morgan), Dickinson graduate of 1888, and wife of President J. H. Morgan died on the morning of April 22, 1927.
For several months prior to her demise, Mrs. Morgan had been ill and suffered from heart attacks. After what seemed like a successful recovery, she once again began devoting time and energy to activities that interested her. She was deeply involved with the Children's Home and was chairman of the Committee on Admissions and Dismissals.She "held many positions in the church, civic and educational circles of Carlisle[:] she was president of the Carlisle Chapter of the American Association of University Women, secretary of the Fortnightly Club, [and was] a member of the Civic Club."
Mrs. Morgan was seated beside her husband on a morning train departing Carlisle on April 22. The couple was bound for Harrisburg where she would attend a meeting of the Trustees of the Methodist Children's Home, as its first Vice-President. They both sat reading letters they received in their morning mail when Dr. Morgan saw his wife's head drop back. Dr. J. B. McCreary, a physician of the Pennsylvania Health Department who was traveling on this train responded to Dr. Morgan's call for help. Soon after, he pronounced her dead.
Mrs. Morgan was born in Williamsport, PA on April 28, 1867 to Dr. and Mrs. Hugh Asbury Curran. She graduated with the Class of 1888 and received her degree of Master of Arts in 1891. She married Dr. Morgan on December 30, 1890. Her demise left behind three Dickinsonians: Dr. Julia Morgan (1911), Mrs. Margaret McElfish (1914) and Rev. Hugh C. Morgan (1915).
Dr. Julia Morgan, was a medical missionary to China. She had gone through war torn territory to a seaport and her father was unable to locate her immediately after her mothers' death.
Mrs. Margaret Morgan McElfish (wife to Russell C. McElfish also a graduate of 1914), was at her home in Edgewood, PA and immediately came to Carlisle when she was informed.
Rev. Hugh C. Morgan was attending his classes in education at Columbia University (where he was a student during his leave of absence from conducting  missionary work in China) when he heard the news.
The afternoon funeral service was held in the Allison M. E. Church on April 25, 1927 and she was buried in Ashland Cemetary. Rev. Dr. Morris E. Swarzt, class of 1889, delivered her eulogy.
Social and athletic events were canceled and the College was closed.

Location of Document in Archives
Dickinson Alumnus May 1927