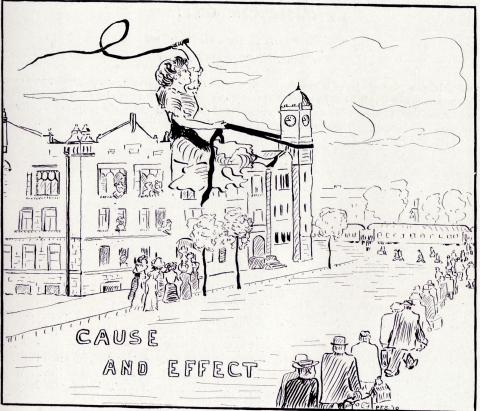 The 1909 Microcosm published a humorous piece, the "Debate on Co-Education: Spirited Riot in Harman Literary Meeting." This piece is about a debate amongst the ladies of the Harman Literary Society on whether co-education is better for women or if it is better for women to study at an all-girl's institution. Some of the arguments for co-education are that it is "beneficial to men...it makes them behave in a more gentlemanly fashion," and it is also a chance for women to show off to the men their intelligence, which is proven by "the fact that they [the women] take so many prizes." Some of the counterarguments are that co-education makes women more careless in dress and habit because of the daily contact with men nor is it fair that the women should take all the prizes from the men. If the women went to a woman's college, the men will work harder for the prizes because then they can achieve them. The debate ended with no decision as a riot then ensued between the two opposing sides.

Location of Document in Archives
1909 Microcosm