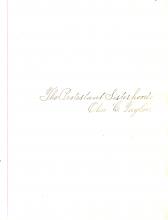 In her senior oration "The Protestant Sisterhood," Olive Taylor discussed the centrality of women in religious communities throughout history. She argues that women's activity as reformers and missionaries within the church in the late nineteenth and early twentieth centuries was unprecedented. For the first time, she asserted, protestant women were leaving the private sphere and working independently within the public sphere. However, Olive argued, women were still being the motherly figures they were born to be. 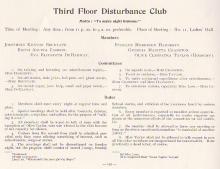 The 'Third Floor Disturbance Club' is a fabricated organization by the Microcosm that meant to poke fun at some of the femles living in Ladies' Hall. According to the Microcosm, the ladies are to meet anytime from 11 p.m. to 4 a.m. and are expected to discuss and gossip about the goings-on at the college. The author then goes on to tease the 6 committee members stating what comittee they represent. 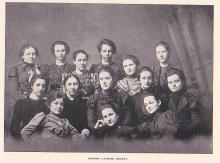 By 1899, the Harman Literary Society for women had doubled in size. In 1898 there were only 9 women who were apart of the society. By 1899 though, the organization now had 18 women involved.