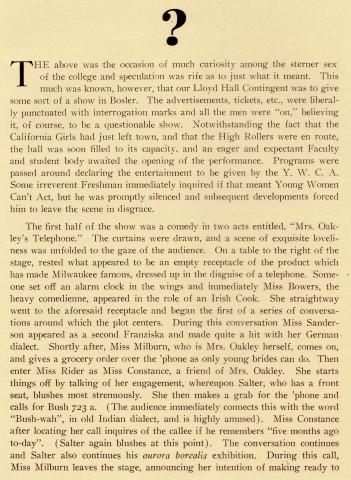 The 1910 Microcosm comments upon the show that the women of the college were to put on. All of the advertisements, tickets, etc., were punctuated with question marks, leaving the theme of the show open to much speculation by its audience. The program declared that the entertainment was to be presented by the Y.W.C.A., which some men thought it meant "Young Women Can't Act" but were made to think differently. The first act was a comedic piece titled "Mrs. Oakley's Telephone" about the many conversations between various characters that takes place on this one telephone. A few other comedic acts follow and the women end the night a success. The Microcosm writes upon this night and congratulates the "young ladies having this entertainment in charge and we hope that it may be an annual affair."

Location of Document in Archives
1910 Microcosm