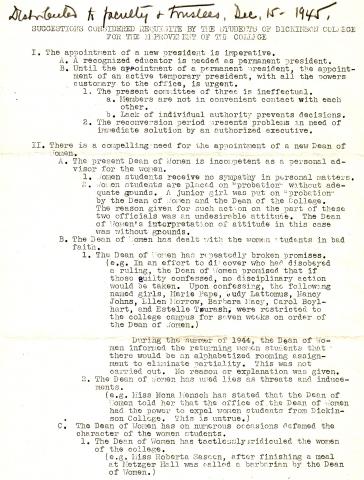 "Suggestions Considered Requisite by the Students of Dickinson College for the Improvement of the College," a document distributed to faculty and trustees on December 15, 1945, claims that the Dean of Women dealt with female students "in bad faith" by breaking promises. The document cites two cases in which the Dean of Women broke promises: in one case, the dean tried to discover who had disobeyed a ruling by promising to revoke disciplinary action for those who confessed. The female students who did confess, however, were subject to disciplinary action and were restricted to campus for seven weeks by the Dean of Women. According to the document, the Dean of Women promised during the summer of 1944 to assign rooms alphabetically to avoid partiality and did not carry out her promise. The document also highlights the dean's use of lies as threats and inducements, giving the example of Winona Mensch (Class of 1948): the dean told Winona that her office had the power to expel female students from the college, which was untrue.