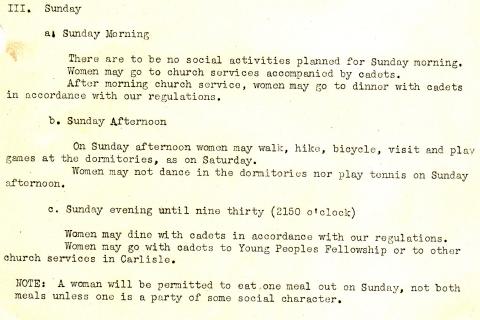 Under the "Social Situation for the Guidance of Women Students," Sunday mornings, afternoons, and evenings (until 9:30-when the dormitory closed for the night) were regulated. Sunday mornings female students were allowed to attend church services accompanied by an Army Air Force cadet, but social activities were prohibited. Sunday afternoons female students were allowed to go for a "walk, hike, bicycle, visit and play games at the dormitories," however, women were restricted from playing tennis and dancing in the dormitories. On Sunday evenings women were allowed to "dine" with cadets or attend the Young Peoples Fellowship or other church services. In a note included at the bottom of the document, female students were restricted to one meal out on Sundays. These regulations were determined during the years that cadets were trained on campus.