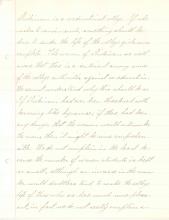 In her 1905 oration "Dickinson's New Era," Florence Hensel Bursk argues for improved conditions for female students at Dickinson College. Following the Denny Hall fire of 1905, alumnea and friends of the college began donating to the restoration of the hall and the overall insitution. Bursk asserted that such contributions engendered the "birth of a new era" at Dickinson College. Despite the great strides being made by Dickinson during this period, Bursk argued that conditions for female students were lacking.