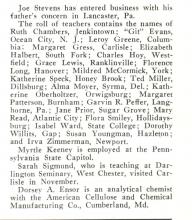 Dean of Women Phoebe Follmer Bacon, formerly Phoebe Follmer, requested another year's leave of absence in order to join her husband for his military duty. 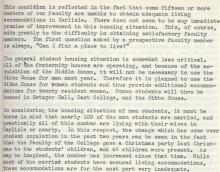 President William W. Edel reported the inadequate housing situation to the Board of Trustees. The president explained that the lack of housing in Carlisle made it difficult to attract prospective professors. Due to the fact that male students would not occupy the Gibbs House during the next academic year, the college planned to use it to house 20 female students. This change would mean that women students would reside in Metzger Hall, East College, and the Gibbs House. 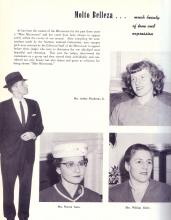 The 1957 Microcosm continued its three-year custom of electing a "Miss Microcosm" along with her court. Like in 1956, fourteen national fraternities on campus nominated female students from which the editorial staff selected nine. These nine appeared before three judges who chose them based on their beauty and charm. They elected Barbara James Kline, a married student, as "Miss Microcosm." The runners up were Patricia Townsend, Mary Greensides, Patricia Eshelman, Inge Paul, Joan Brownell, Sue Fooder, Jeanne Thomas, and Nancy Cross.

As in the case of Marian Breu Harlan (Class of 1952), the 1952 Microcosm lists the marriage plans of a graduating female student. Janet Z. Imler is listed as a "February grad, June bride." 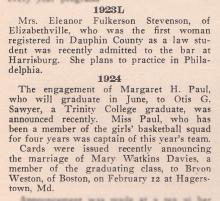